Some food highlights from my Florida trip:- 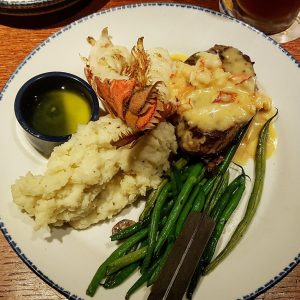 The night we arrived in Florida we went to Bob Evans and I had Burger and chips, nothing special. Also I really wanted steak there but they ran out of steak and we then found out they also ran out of chicken!

The Second night we went to Red Lobster and that’s when the real eating began. Before we had our main we were provided with complimentary cheesy biscuits. And for the main I got their special surf and turf consisting sirloin and lobster. 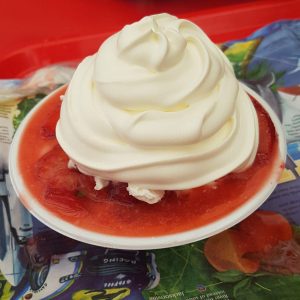 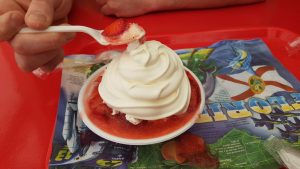 This place is apparently world famous and is the largest family operated Strawberry and Citrus market in Florida, also have been visited by politicians such as former President Barack Obama and Senator John Mccain.

The photos above is a Strawberry Sundae which doesn’t really do justice to how big it is, we shared it between two people. 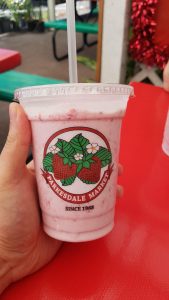 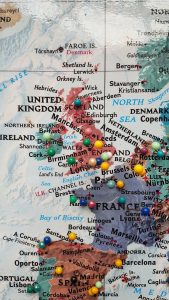 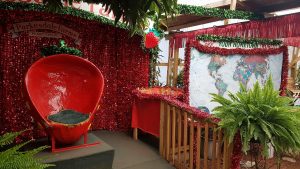 As you can see we are the only ones from Wales and a few from the UK to visit this place. 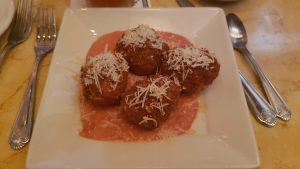 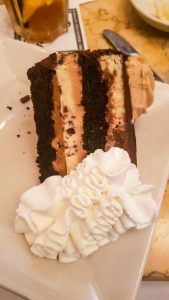 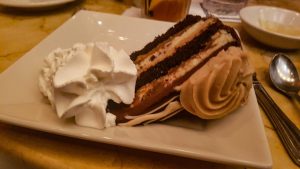 We had lunch in Tampa in a Mexican restaurant called Spotted Donkey Cantina which was nothing special, had some sort of fish burger with potato salad.

Then we decided to visit The Cheesecake Factory, we initially planned to just get a cheesecake but decided to get some appetisers as well. I opted for Fried Mac and Cheese balls which I’ve never been too keen on, but glad I had tried as they were amazing!

It went well with the marinara sauce and the cheese on top, also it felt like a main dish rather than appetiser. I was actually quite full after,  but I also had the cheesecake.

Spoilt for choice as there were so many to try, I asked the waitress for her recommendations which she gave me a few. Still stuck to decide on what to get I finally opted for a  Reese’s Peanut Butter Chocolate Cheesecake. Unfortunately the presentation of the cheesecake was not at it’s best as it collapsed.

Surprisingly I struggled to finish the Cheesecake which is probably due to the appetiser I had but managed to finish it at the end. 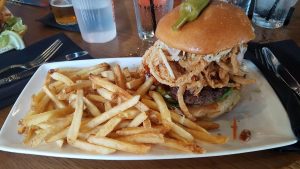 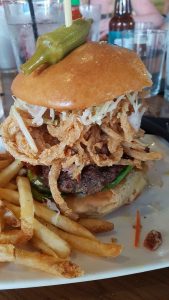 Went to this place in City Walk at Universal Studios, this is a cool place that does Burgers and Sushi and offered some cool foods like a bento box with a burger and sushi, also sushiburgers which looked cool. I opted for the The Big Squeal Burger which looked epic and struggled a little to finish it. 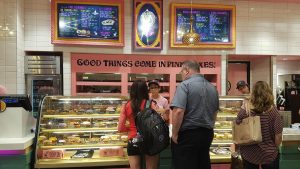 There was a Voodoo Donuts in City Walk and we decided to get a box of twelve donuts. There are only five locations of this place and obviously they were very popular as we had to queue up 10-15minutes outside to get in the store! 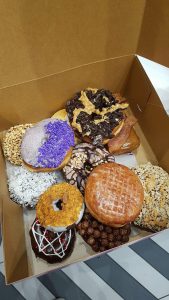 The donuts were big, can’t remember what we got but they were nice and big. 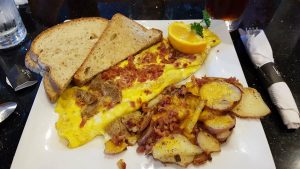 Usually we had breakfast at home but we did go out once for brunch in Keke’s Breakfast Cafe.  We found out when we got there that we had to wait for a hour to get a table, so we waited and it was well worth the wait. I had a Three meat omelette with Ham, Sausage, Turkey and “white American cheese”. With bacon and cheese potatoes, and toast on the side. The omelette was amazing! Also the pancakes they do are super thick. 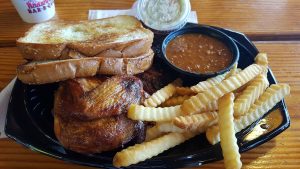 This place has won numerous awards and have been featured on CNN, The New York Times, and many more media outlets. It has also been voted best BBQ dive in America by the Food Network.

I got the Bubbalous Special with contained Ribs, Chicken, Beef and Pork, which is served with fries, baked beans, coleslaw and bread. You can’t really see much from the photo above but there was a lot of meat! 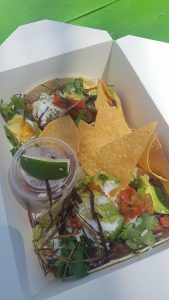 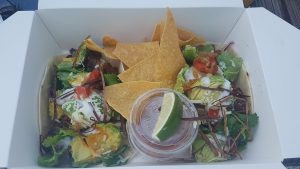 Went to a Taco truck in Key West which do some cool food, you can see their cool stuff on their Instagram. I went for the “Nama’steak” which is tacos with large chunks of steak. 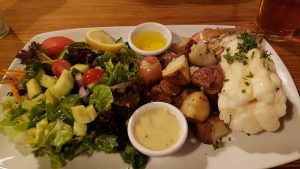 At this point I usually go for a surf and turf and was tempted to get another, but as we were in Key West, I decided to go for the 10oz Florida Lobster tail which accompanied with a huge house salad, and a choice of a side which I had garlic red potatoes. 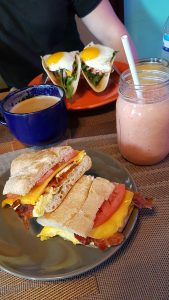 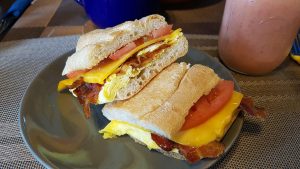 Before we left Key West we went for breakfast at a cafe called Keys Coffee Co. which I had the “Keys” sandwich consisting of Bacon, Tomato, Eggs and Cheddar on a toasted Cuban bread. With a Strawberry and Banana Smoothie. 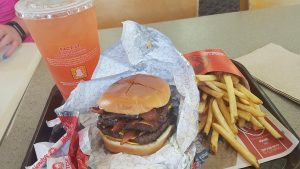 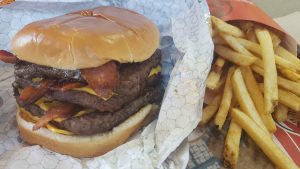 On our way back from Key West after a trip to the Everglades we went to Wendy’s and I had a Triple Baconator Cheeseburger which was awesome. It also came with a really nice refreshing fruit juice. I was really impressed with Wendy’s and have to say they could be better than McDonalds. 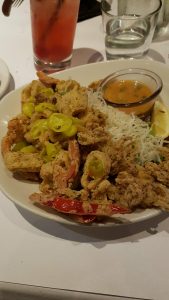 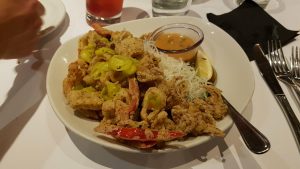 So on our last night we decided to go somewhere fancy and even wore our shirts to the Bonefish Grill. The picture above was the starter Calamari which was a huge portion, it was a size of a main and needed help with finishing.

Also I had one of my friend’s Crispy Cod Sliders which blew me away and was impressed at how good it tasted. Not sure how it tasted so good but it was just cod in a bun with their signature sauce accompanied with lettuce and tomatoes. Simple but somehow amazing. 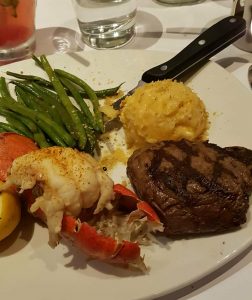 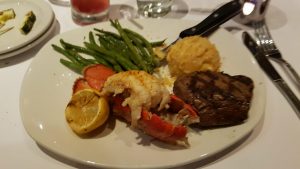 Once again I struggled to choose what to get so opted for a Surf and Turf with Sirloin steak and Lobster tail. Their potato au gratin was also banging. 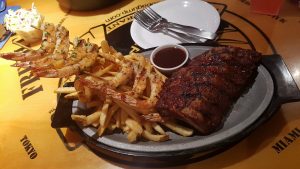 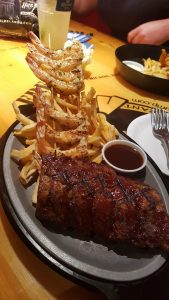 On our final day we revisited Universal Studios and went to Bubbagump Shrimp which isn’t my first time as I previously been to one in London. The restaurant is based on the movie Forest Gump and the waiter even gave us a quiz on the movie while we were waiting for our food. I got Ribs and Shrimp.