While I was in Hong Kong, I was lucky that the CCB (Asia) Wine and Dine Food Festival was taking place from October 25th – 28th. I had no idea about it until my parents suggested we go as they heard about it on the news.

The festival consist of cuisines by top chefs from around the world offering different gastronomic experiences and signature dishes from Hong Kong’s top restaurants and hotels. Also not just food, as the festival offers alcohol such as wine, beers, cocktails etc, with tasting classes by experts.

Located in Victoria Harbour which is a perfect area as it provides an amazing view of Hong Kong’s skyline with the city lights. 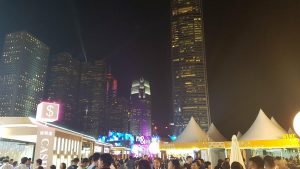 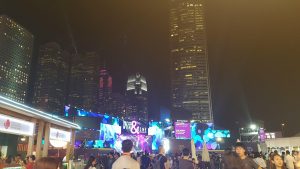 We went on the Friday during the day which was really quiet as the majority of people would be at work, it was great as there was no queues and it wasn’t too crowded. 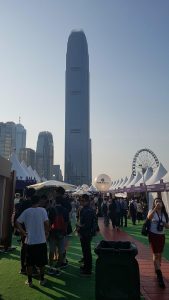 I decided to leave and do a bit of exploring in central Hong Kong and then go back to the festival to experience what it was like in the evening.

Lucky I had a stamp on my hand to return to the festival as there were massive queues when I came back. Probably the fact that it was a Friday night and it was located right next to the centre of Hong Kong where everyone works. 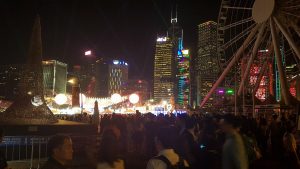 There were also live music and entertainment. 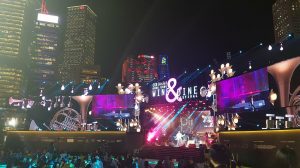 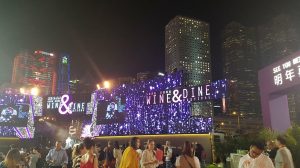 There were many food and drinks from around the world such as Oriental, Indian, French, Spanish etc.

Below are the foods I tried from the festival, ranging from Chinese, American, Italian, German and Georgian:-

Giant Squid on a Stick 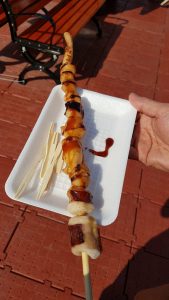 Creamy and Cheesy Pasta Carbonara that was cooked on cheese 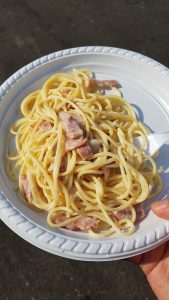 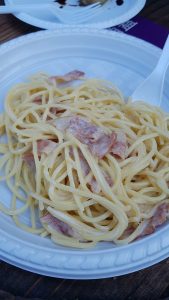 The Carbonara pasta was from Marco’s Oyster Bar and Grill which is a Italian restaurant with five restaurants around Hong Kong. 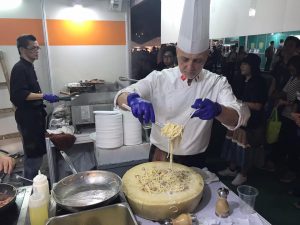 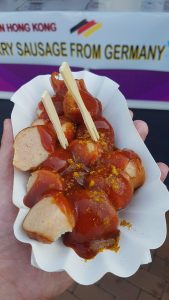 Love a Currywurst and haven’t had one in a while, as there were a few German food stands in the festival, I had to get one. 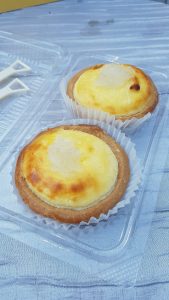 This was from the Royal Plaza Hotel stand, a different take on the traditional egg tart. These are Baked Cheese Tarts with a bit of Bird’s Nest on the top. And no, Bird’s Nest are not actually Bird’s Nest, it is solidified bird saliva which are harvested for human consumption. It is one of the most expensive animal products consumed by humans and is normally used for desserts.

Back to the Baked Cheese Tarts,  it consists of cheese mousse with crispy pastry on the outside. Tastes a bit weird to me as it has a savoury taste while it’s meant to be a dessert, and I’ve never been a fan of mixing the two together. 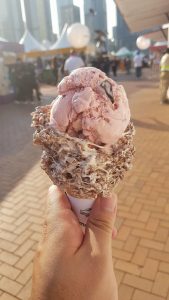 This Ice cream was from Emack and Bolio which is an American Ice cream brand and apparently they created the original marsh “mellow” funky cones out of Oreos, Rice Krispies and Froot Loops.

Angus Beef Streak on some Toast 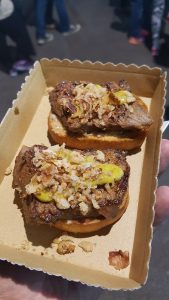 Got this from an American stand, it’s pretty much Angus Beef on toast, I remember that it was quite pricey costing around £7-8. Also I finished it within a couple of bites. 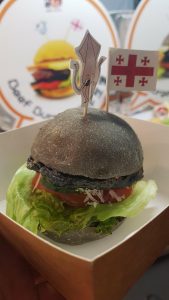 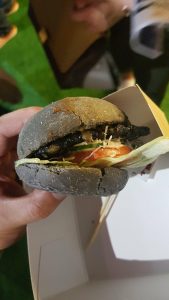 Unfortunately I forgot what was the name of the stand I got this burger from, it was interesting as it had a number of Georgian burgers, I opted for the Black Burger which the burger was made from Squid in a black bun. However one thing I am not sure is what’s Georgian about this burger?