One of the best protein bars out there along side Grenade Carb Killa Bars is Protein Dynamix’s Dynabar, apparently they have been voted the UK’s “best tasting high protein bar”.

I was able to try a few samples of these in BodyPower 2016, but they were the Dynabites (15g), which were a lot smaller than the Dynabars (64g). I think they were the Chocolate vanilla Crunch flavour and I remember being surprised how good they tasted, and reminded me of the Toffee Crisp chocolate bars.

Back then I hadn’t tried the Grenade Carb Killa Bars, so I couldn’t believe a protein bar could taste that good. I saw the Protein Dynamix website had a deal and decided to buy the Chocolate Vanilla Crunch and Chocolate Caramel Crunch flavour costing £17 for each box of 12 bars.

I was excited to try the Vanilla Crunch flavour expecting it to be like the Dynabites I had tried from Bodypower however the bar was a lot harder than I had expected, it reminded me more of the Crunchie chocolate bar than a Toffee Crisp. The Dynabite samples I had from Bodypower were not as hard as the large Dynabars. Not sure if it’s just the bars in the box I had were not right, because the Caramel Crunch flavour surprisingly wasn’t chewy as at all and was actually really soft.I  may have to try another box of Vanilla Crunch in the future to see. 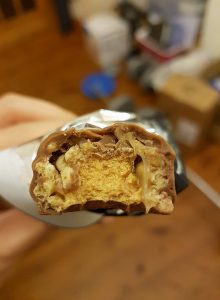 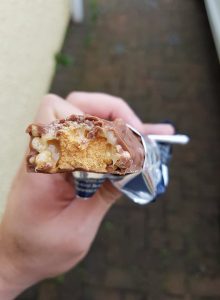 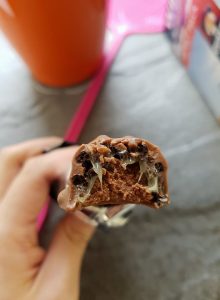 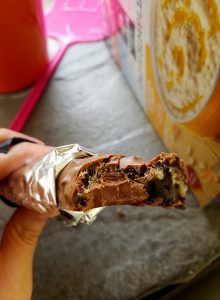 In a summary Protein Dynamix’s Dynabar is one of my favourite Protein bars out there alongside Grendae Carb Killa. Although it has 10g more carbs, little bit more fat (1-2g), and 53 calories more than the Carb Killa bars.